by The Mad Preacher, Rod Davis

This is an addendum to “Fire in my Bones!” It’s also a hard copy of my next YouTube video

Romans 3:16 says, “For I am not ashamed of the gospel, because it is the power of God that brings salvation to everyone who believes: first to the Jew, then to the Gentile.”[1]

I grew up setting sitting on a pew. My dad was a well loved pastor who knew God’s

WORD like the back of his hand. So, I was exposed to the Gospel early own. I came to Christ in 1959 and was baptized in a small cement pool in the basement of the Back to the Cross Southern Missionary Baptist Church in Chicago, Ill. Incidentally, it was the first Southern Baptist ever in Chicago and was started my Dad’s older brother, Henry.

Jesus said in Acts 1:8, “But you will receive power when the Holy Spirit comes on you; and you will be my witnesses in Jerusalem, and in all Judea and Samaria, and to the ends of the earth.”

It wasn’t until the summer before my sophomore year in High School that I finally went radical for Jesus. God baptized with his Holy Spirit and I finally got serious about my walk with Jesus. After that, I tried sharing Christ with my friends and school mates nearly every day.  My list of “friends” grew sorted and my list of Christian friends got longer.

Over the years I’ve witnessed something that puzzled me for a long time. Jesus said, “I am the good shepherd; I know my sheep and my sheep know me…” (John 10:14) The question is why are his seep silent? Why the silence of the lambs? “Has the LORD redeemed you? Then speak out!” (Psalm 107:2)

It’s not about showing up for Tuesday visitation where few actually show up, like the dynamic duo, or the Fantastic Four or The Three Musketeers. Sadly sometimes it’s only the Three Stooges who show up.  If you’re a pastor you can possible relate.

So many are afraid to break the silence and share their faith with others. They fear embarrassment or fill ill-equipped by their lack of Biblical knowledge. All you have to do is to open your mouth and God will fill it. Bear in mind that the early Christians didn’t have the New Testament to quote from. However, that didn’t stop them. They were witness to what Christ had done for them. Again, Jesus said in Acts 1:8, “But you will receive power when the Holy Spirit comes on you; and you will be my witnesses in Jerusalem, and in all Judea and Samaria, and to the ends of the earth.”

According to the New York Times on March 27, 1964, “For more than half an hour 38 respectable, law-abiding citizens in Queens watched a killer stalk and stab a woman in three separate attacks in Kew Gardens.” And not one of them called the police or tried to help her.

The Times went on to say, “Assistant Chief Inspector Frederick M. Lussen, in charge of the borough’s detectives and a veteran of 25 years of homicide investigations. He can give a matter-of-fact recitation on many murders. But the Kew Gardens slaying baffles him—not because it is a murder, but because the “good people” failed to call the police.”As we have reconstructed the crime,” he said, “the assailant had three chances to kill this woman during a 35-minute period. He returned twice to complete the job. If we had been called when he first attacked, the woman might not be dead now.”

Are we, who profess to follow Jesus, any better that those 38 people when it comes to warning lost people about the coming judgment? Will we answer the call like Isaiah did in chapter 6: verse 8 Then I heard the voice of the Lord saying, “Whom shall I send? And who will go for us?” And I said, “Here am I. Send me!”

If you were on a street and saw someone about to be hit by a car what would you do? Would you just stand there and do nothing? Or would you spring into action and grab them by the arm and pull them to safety?

By The Mad Preacher 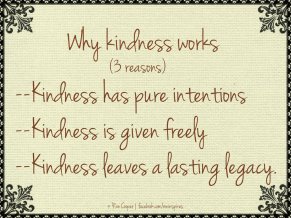 I know what I want on my grave marker. I thought about putting “Not at the address any longer.” But that was too silly, even for me. Then about 2 years ago I was in the elevator in my building. I bent over to speak to this sweet little old lady who in a wheel chair that I knew. “How you doing, sweetheart?” She looked up at me and exclaimed, “Oh… you’re the man that always so nice to me!”

As I was straitened back up I heard a voice coming from the other side of the elevator. “You know why that is, don’t you?” he asked. It was a man called Crazy Horse. He was a blend of about three different tribes of Native Americans. I was surprised when he spoke to me because he hadn’t spoken to me in the 3 years I lived here. “You know why that is, why you nice?” he said. “No.” I responded. “It’s because you’re kind.” I was stunned. His words touch me so deeply. I didn’t know how to respond.

Afterwards, I pondered what Crazy Horse said to me. I remembered what Peter said about Jesus in Acts 10:38. You’ve heard about Jesus “how he went around doing good”. Do I want to be remembered for any great deeds I may or may have not done, or any accomplishments I may or may not have done? Is that how I want people to remember me? No. Put these words on my tombstone, if you will, “Here lays Rod Davis. He was kind…”

Nowhere in the New Testament does it teach… teach that is, that Jesus is coming back to earth, set up a throne in Jerusalem and reign for a 1000 Years. It’s just not there!!! So, why teach and preach something that God’s WORD does not teach.

I warn everyone who hears the words of the prophecy of this scroll: If anyone adds anything to them, God will add to that person the plagues described in this scroll. (Revelation 22:18)

“I’ve got good news for you! And this is from the Lord! Your life is not a Titanic, but it’s an armed and dangerous atomic submarine that’s just gone under the surface for a short time. It’s getting ready to surface, with guns blazing, and deal a death blow to the Enemy.

The storms may be raging with an intense wind that threatens to rip your sails apart and crash you on the rocks of defeat and despair, but Jesus, the Master of the Sea, lies sleeping in the heart your ship. He’s getting ready to awaken and rebuke the storm and put your ship back on a steady course. Do you believe it?!” — The mad Preacher from his YouTube message entitled “Bones!” at https://www.youtube.com/watch?v=7EKsxZZTPd4